To our valued supporters. The health and safety of our staff and customers is our top priority. In accordance with Canadian health officials and the WHO, The Solo team has decided to temporarily close our brick and mortar location. Our online store and customer support lines will remain open for all your needs. The WHO has made it clear that it is safe to handle packages and shipments. We are supporting our warehouse staff by taking every necessary precaution to ensure that they are protected and that your orders are delivered to you safely. Stay safe and stay creative. Solo Guitars Team 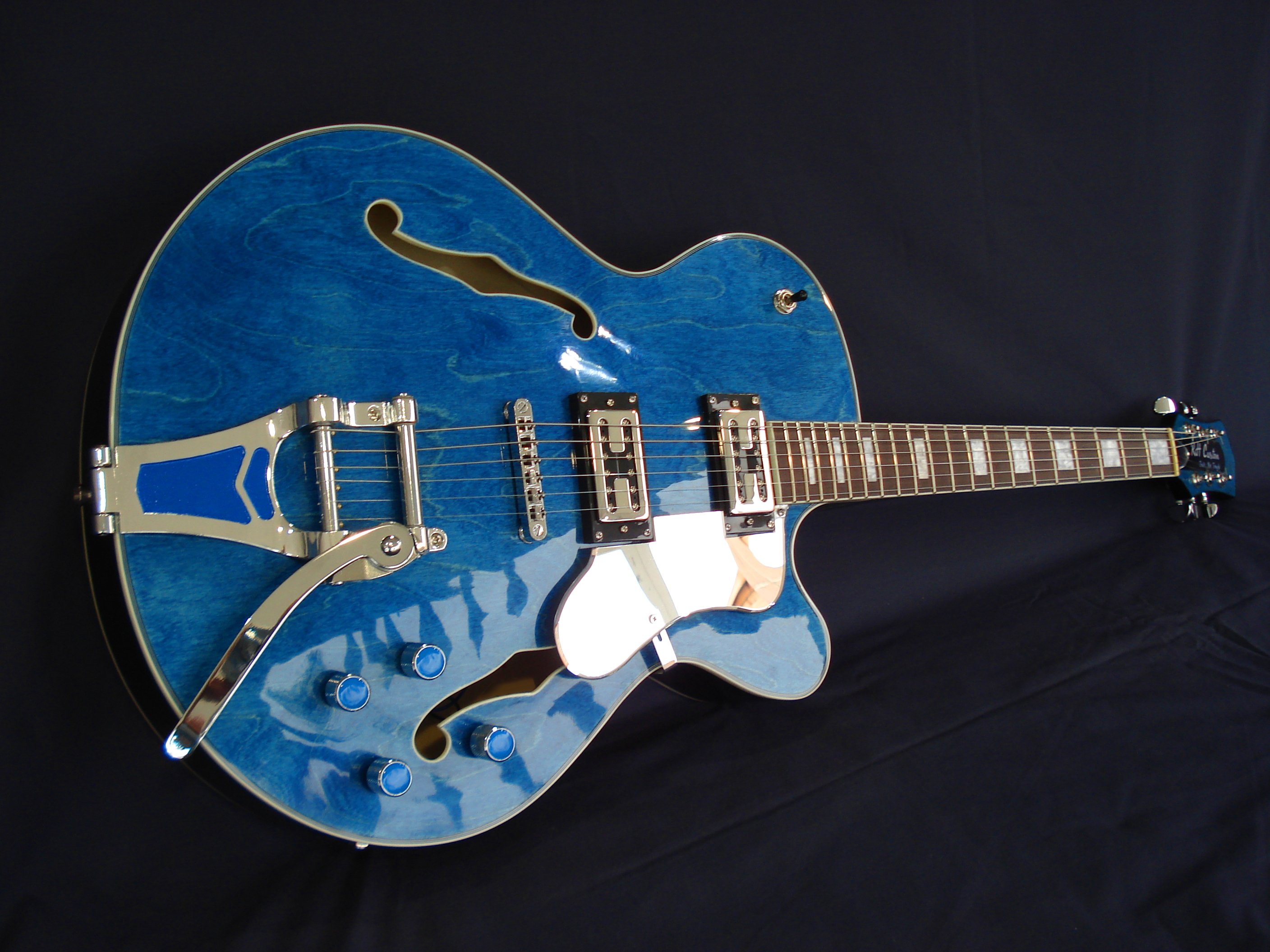 Congratulations goes out to Rick Horwath for his guitar build, to earn him Guitar of the Month for July 2018.

Rick used our GFK-10 guitar kit, to create his guitar.

“First of all, a tip of the band saw table to Kevin Taylor for his marvelous Guitar of the Month build for May of 2018.  As a Master Level woodworker, I have to say that Kevin’s work on his build is an example of patience and skill in bringing a vision to life.  It makes me wonder, though, if his last name is related to the guitar brand of the same name.

As I said, I am a Master Level woodworker, having spent most of my time with custom shelving, display cabinets, custom office cabinetry and custom kitchen cabinetry, inurnment vessels, and the occasional fireplace mantle.  I was looking for something to challenge my skills a bit, something “out of the box”, so to speak.  Having played guitar since my teens, (a hell of long time ago), I started looking into building a guitar.  Since my wife informed me that the family room needs to be re-done, I decided that a kit guitar would be better than starting from scratch, it would take less time.

I’ve never worked with lacquer, or aniline dyes, so I knew that was worth trying.  I realized that I didn’t have a guitar with a vibrato, so, that was a must.  The Solo Guitar GFK-10 fit all my needs, so away we went.

Solo’s protective poly resin coating is easy to remove.  I used a fine water mist to make sure the coating was removed while sanding.  If there was still coating, the water would bead up.  Then it was on to applying the aniline dye.  I used Keda Dye Royal Blue on the body front and the front of the headstock.  Excess dye was cleaned off the purfling and f-cut liners

Using 3M Precision masking tape, I cut 1/8 inch strips 24 inches long to accurately mask off the purfling on the body and the f-cuts, and then taped off the fretboard and truss rod nut.  Four coats of ColorTone Clear lacquer was applied to the face of the body to protect the aniline dye prior to gluing the neck to the body, since the aniline dye is water based, and any excess glue squeeze out would damage the dye.

The neck was attached using a Vice-Grip Quick Clamp to set the neck to the bottom of the body, while 3/8 inch surgical tubing was used to set the neck towards the neck pickup hole.  Everything dropped into place with no modifications needed.

After the neck was set, the front of the body was taped off to end at the purfling masking tape, and four coats of “rattle-can” ColorTone Black Lacquer was sprayed on the back, sides, and neck.

Then came the time-consuming steps: 17 coats of “rattle can” ColorTone Clear Lacquer.  Each coat was applied at two hour intervals over a period of 4 days. (I do have an actual job I have to deal with.) After the 10th coat, I used 600 grit wet-or-dry to level sand the lacquer, and touch up the few small runs that occurred.  The last 7 coats were sprayed on, and the guitar was allowed to set for 24 days.

The guitar was again level sanded with 600 grit, 1000 grit and 200 grit wet-or-dry.  Then came the fun part, polishing.  I used ILM Medium cut polishing compound and a drill driven set of polishing pads. Once the medium cut was done, I went with Novus #2 Plastics polish by hand.  I know that people say not to use Novus because of the minute amount of silicone, but, if there is an area that needs touching up, simply wiping the area with SEMSOLVE 38374 will get rid of any silicone residue before the touch up.  Next, I finished up with Meguiar’s M10 Fine Plastics Polish overall. Now, the finish is not what I would consider “Factory”, but, you can only see fine swirls in direct sunlight.  By the way, all hand polishing was done with new, clean, heavy weight terry washcloths I got from Amazon, the 24 pack of Amazon Basics.  They wash out real nice after use.  Finally, I decided to give it a coat of Turtle Wax Ice protectant, which did an excellent job of covering up many of the swirls marks.

From the outset, it was obvious that the pick guard supplied from Solo was not going to work, the color was all wrong.  I traced the outline on a ¾ inch piece of oak, and did a close trim of the outline with a band saw.  Then I used an oscillating spindle sander to smooth out the cut to the trace lines.  The template was then mounted on another piece of ¾ inch oak.  I purchased some mirror pick guard material from Amazon, and traced the original pick guard outline on the mirror material.  Again, using a band saw, I close cut the mirror material to the trace lines.  The rough cut was mounted onto the oak template, and a trim router with a flush cut bit was used to trim the mirror pick guard to the oak template shape.  Then I used a laminate trim bit to bevel the edge of the pick guard, which was then filed down and sanded, then run up against the plastics polishing buffer to give the edge a mirror shine.  The same thing was done for the custom truss rod nut cover.

Electronics installation in a hollow body can be tricky, but, with the use of monofilament fishing line and a spring hook, the electronics installed without a hitch, just a little time consuming.  A section of line is run through a hole, say, for the pickup switch.  The line is fished out of the body using the spring hook, and tied to the switch lever.  The line is pulled back through the hole until the switch comes up through the hole.  The mounting hardware is attached, the switch is aligned, the hardware is tightened down, and the fishing line is cut off the switch.  The same routine works for the pickup volume and tone potentiometers.  Just don’t tie the fishing line to the threads, it’s almost impossible to get it through the hole and get the hardware on it.” 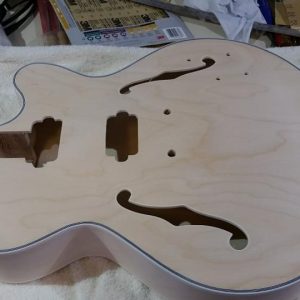 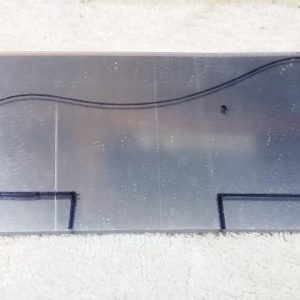 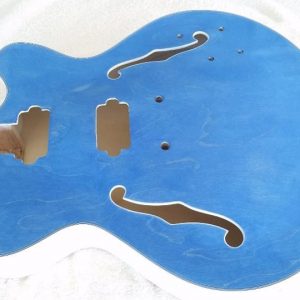 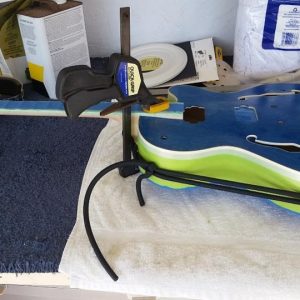 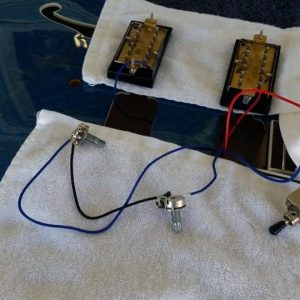 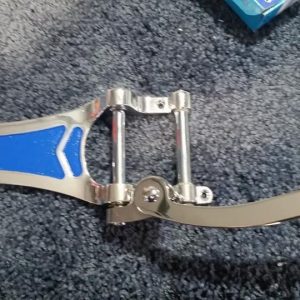 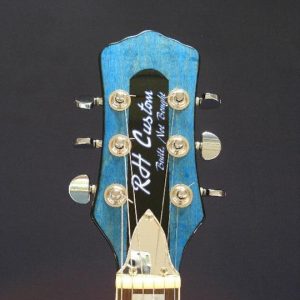 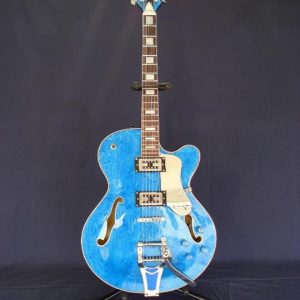