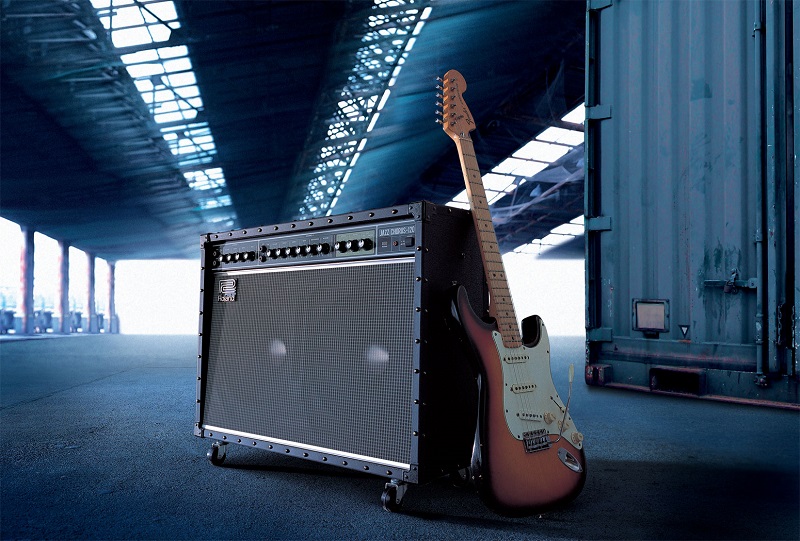 The ‘guys in the back’ here at Solo Guitars have been trying to get me to write about subjects other than building or  guitar or hardware companies.  They suggested I pick an iconic piece of gear from the catalogue and maybe write a piece on that for a change…you know, an iconic pedal for instance, or a type of pedal.  So since I am getting old(er), and have been in this business as long as I have, I have been known to get a bit grumpy when told what to do.  Therefore, I have chosen to write about the much maligned Roland Jazz Chorus amplifier……cue the cheering audience.

Much maligned I say?  Well to start with, the JC is a solid state amplifier, which immediately makes it a target for all the hard core ‘tube’ guys.  Bring one to a jam or a rehearsal and you will see what I mean….ew, who plays solid state?  Well, these days you are still cool if you have one of those new fancy modelling amps (which Roland also manufactures) but really?  A Jazz Chorus?  As good an amplifier as it is, in the circles I traveled in, it never had a great following.

Back in 1975 when the musical instrument industry was growing leaps and bounds, and new equipment was being introduced faster than you could get to your local music store and switch gear, the Roland Corporation decided they would build something unique and more reliable than another tube amplifier.  They wanted the cleanest sound possible, with lots of power and added a built-in stereo chorus effect.  This spacey stereo effect was actually introduced to the world of music in this amp….yup, before it was available in a pedal.  In 1975, the JC was available in 2 models, the JC-120 with 2 x 12″ speakers, and the JC-60 with a single 12″ speaker. The line was expanded and reduced over the last 44 years becoming available with 4 x 10″ speakers, or 15″ speakers down to 6.5″ speakers,  and power ratings from 200 to 20 watts.  The basic design however stayed the same and the amp became known as the ‘king of clean’.

So who actually used the amp?  Strangely enough Albert King, one of the blues Kings used a JC (of course BB King was famous for using his Lab Series 5 among other amps which was also solid state). Disco and funk were also becoming very popular, and guitarists in these genres were attracted to the ultra clean sound of the JC.  Surprisingly enough James Hetfield and Kirk Hammet of Metallica were known to use the JC for their clean tones in the heavy metal genre.  Andy Summers from the Police, Wes Borland from Limp Bizkit, Robert Smith of The Cure, Billy Duffy from The Cult and Steve Hackett were also fans.  Those guys should make the JC somewhat more interesting for even the most doubtful.

The history of music gear is pretty colorful, and there are always surprises when you take a look at who played what when.  As much as Solo Guitars is supplying guitar kits to fuel your creativity and all the parts to make your projects even more special, we are slowly starting to provide the accessories and electronics to spark your imagination.  The Roland Jazz Chorus Series of amps are just one of those products that I thought would be worth writing about…..the Jazz Chorus….who knew?