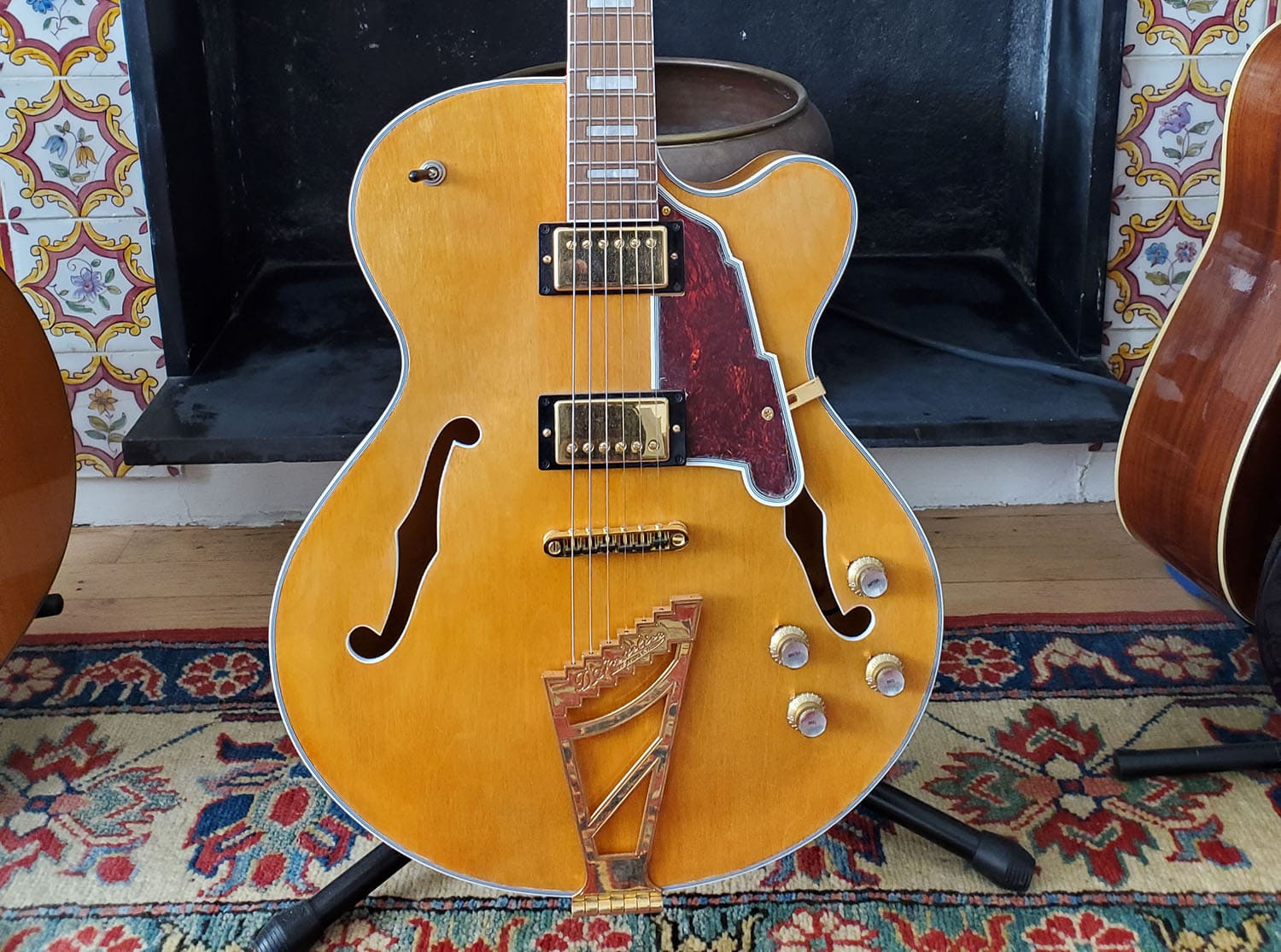 Congratulations goes out to Andre Glenn for his guitar build, to earn him Guitar of the Month for October 2019.

Andre used our GFK-10 DIY kit as the basis to create his guitar.

“This is my take on what is probably the greatest Jazz Guitar ever made, the D’Angelico “New Yorker”.  I’ve been building my own guitars for years, starting from the raw planks of wood all the way through to applying the final polishing.  My wife bought me the Solo GFK-10 Kit as a Christmas gift. Though I like to build everything myself, I have to say that the GFK-10 is a very well-made kit. The bindings are well done, the wood veneer is good looking, and the neck fit the body perfectly.

Given the body shape of the kit, I was inspired to make a few modifications to the kit in order to turn it into my version of a “New Yorker”.  John D’Angelico was the pre-eminent builder of the finest Jazz guitars ever made.  His hand-made guitars were highly sought after by the biggest musicians of the 1930s, 40s, and 50s.  In his lifetime, D’Angelico made a little over 1,100 guitars, and 300 or so were what would be his masterpiece, the “New Yorker”. It was inspired by the New Yorker hotel in Manhattan, with its art-deco influenced tailpiece, headstock, pickguard, and truss-rod cover. Its a beautiful museum-quality guitar. Which in fact it was, as it was the centerpiece of an exhibit at the Metropolitan Museum of Art in NYC back in 2011 that celebrated the legendary Italian-American guitar builders of NYC.

I cut the pickguard in the art-deco shape of the New Yorker’s pickguard. I made a 5-ply binding and then attached it to the re-shaped pickguard.  I then cut the headstock in the distinctive shape of a New Yorker, albeit not as huge as the original, but close enough.  I fastened a brass finial as can be found on New Yorkers. I cut an ebony overlay in the shape of the headstock and applied a 5-ply binding to it. I made a mother-of-pearl inlay by hand, in the style of the New Yorker’s headstock inlay and mounted it into the ebony overlay and then glued the overlay to the headstock and trimmed them flush. With a little filing and shaping, the fretboard feels great.  The tailpiece and the truss-rod cover are genuine D’Angelico parts. The nut and the bridge are both Graph-Tech products.  The strings are D’Addario Half Rounds.  I replaced the pots with Bourns 500K pots, and I’m using PIO capacitors. The pickups are Seth Lovers by Seymour Duncan.  All of that adds to a warm, full, “I am a Jazz Box” sound.

I stained the guitar in a nice light amber-gold that I created by mixing different Keda dyes to give it the appearance of being a 1940s-era guitar. I finished the body with numerous very-thin coats of General Finishes “High Performance” Gloss Poly-acrylic. The thin coats of Poly-acrylic protect the wood without it looking or feeling like its been sealed in plastic, plus it gives you more control over how thick you want the finish to be.  After wet-sanding up to 2000 grit and applying Meguiar’s Ultra Finishing polish, the surface buffed out to a nice shine. To finish things off I did a final buffing with Renaissance Wax. It’s the wax that museums use to protect wood surfaces. It applies by hand easily, and when it hardens, it provides an impenetrable cover for the wood that buffs to a glossy shine.

The guitar looks, feels, and sounds great, better than much more expensive boutique models. But I’m biased 🙂 From across the room, one might be persuaded to think that its an actual D’Angelico :-).  I can’t say how pleased I am with the quality of the build of the Solo GFK-10 kit. I look forward to doing another kit in the near future.” 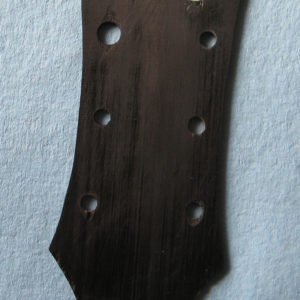 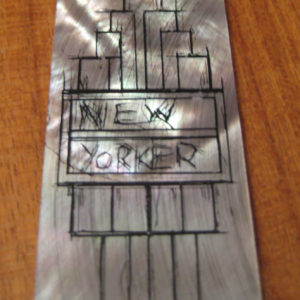 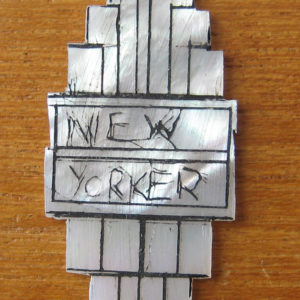 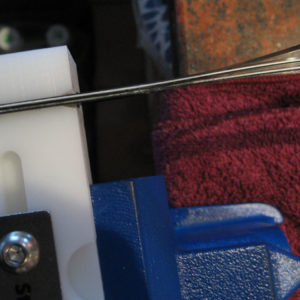 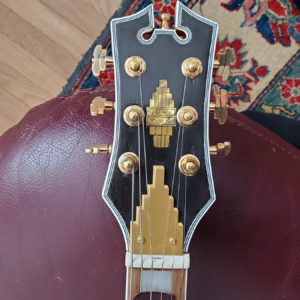 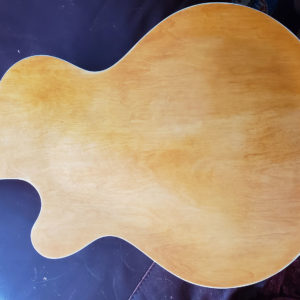 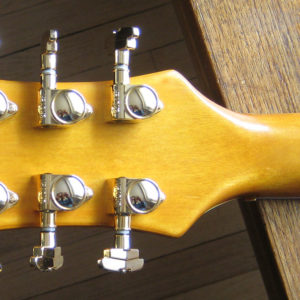 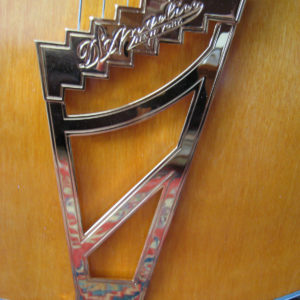 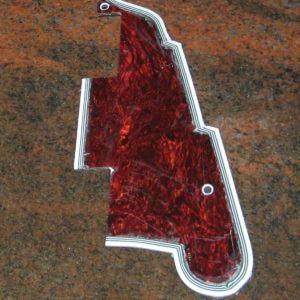 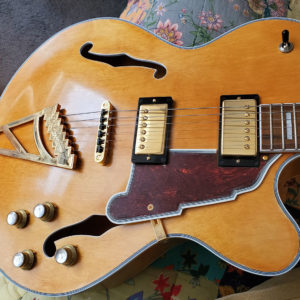 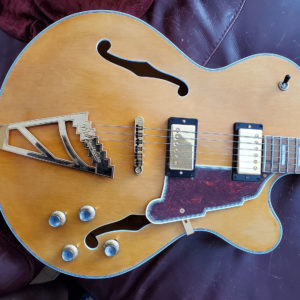 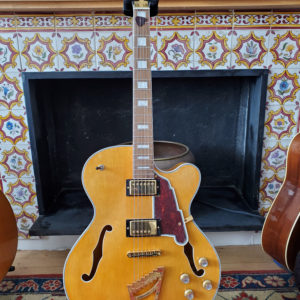